Remote debugging is a feature of the ICEbearPlus extended debugging toolchain. It enables you to grant access to a locally running debug agent by using SSH tunneling feature of the third party application Putty. For example, if your hardware shows a problem in the field or development of a new flash driver is required, debugging service can be provided by us without the requirement to send hardware.  So the steps for a service technician are:

Add the host name and port as shown below. You may want to get back to this menu later and Save this session for later use. 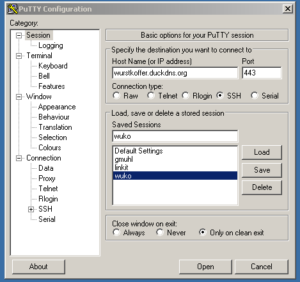 When you make a connection, a black terminal window pops up and will ask you for login data (sent to you separately).

To grant access to a local port of your computer, the tunnel needs to be configured as ‘Remote’, i.e. the ‘Source port’ of the remote host is forwarded to the local port. Means, an authorized person logged in on the remote server can connect to your local port as long as Putty is active.

To open a remote port forward, add ‘Source port’ and ‘Destination’ as shown below and click ‘Add’. Do the same for both ports 2000 and 4000 for the local gdbproxy server, such that the settings are displayed in the image on the bottom. 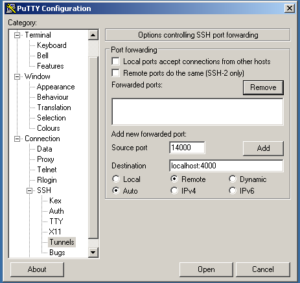 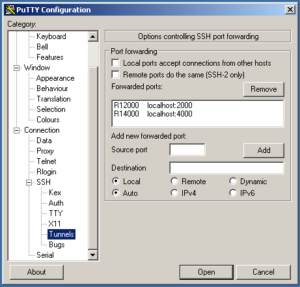 Then you can connect using ‘Open’.

Then the gdbserver should fire up as shown below. 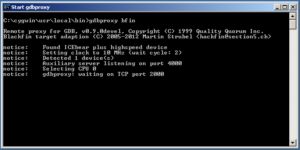 Once a connection is made, you can see this on the console. Also, the status during debugging is displayed. If the connection through the tunnel is effective (i.e. Putty tunnel session active) a connection can be made.

A safety notice: No other person aware of this information can connect to your target. Only authorized persons with a login can access your local ports during an active session. Once you terminate the Putty session by closing the window, all connections are terminated and no more access from outside is possible.

The PCB arrived 3 weeks ago, and finally, the time was found what should have been tried out long time ago.

Here’s the result. The tiny mobile type camera is able to deliver JPEGs from the sensor, that is, we can run our motion JPEG server on the popular SRV1 robot from http://www.surveyor.com.

The videos can just be watched in a browser or with mplayer. Still tweaking frame rates and PLL…

The board supports another VGA global shutter sensor with cheap webcam optics, as you can see from the unpopulated footprint. If things work as expected in theory, both sensors can be populated and selected via GPIOs, so they can be switched at runtime. The bigger problem is, to make the uClinux framework (which is about to be ported to the SRV1) acknowledge the dual head device. The current driver model does not really support that, so all sensor property control is happening in user space via the netpp (network property protocol) framework.

Update: Sadly, the brain behind the SRV1 and development partner Howard Gordon has suddenly passed away: https://www.sanluisobispo.com/news/local/article39130170.html

It was great to work with you. You will be missed.

Therefore, further development on this has currently come to a halt. The future SRV1 development is maintained by Timothy Jump at https://engineering3.org

The leanXcam has been out for a while now, finally I got my hands on a OEM module.

Now, how to run our standalone netpp framework:

The JTAG (which we definitely need for bare metal, i.e. non uClinux development) wasn’t populated. The helpful folks at Supercomputing systems told me the specs of the somewhat unusual SMD header:

Keep in mind that pin 3 must be spare for the key.

So, after being set with JTAG, I plugged in one of the new ICEbearPlus units and run the flashloader:

This is what we get:

Cool, that worked from the spot. There is another flash on SPI select 5, i.e. found by flashloader via the –unit=4 option. Before starting to hack, it might be a good idea to save the flash images:

So now. We got this standalone shell code to try out stuff, lets see how the code from the pretty similar STAMP BF537 board can be ported. After a few modifications later, I seem to be able to talk to the shell via the bfpeek console (the bfpeek channel is a way to do stream I/O over JTAG without the need to attach a serial cable):

Let’s see if we see something on the i2c bus:

Right, that should be the i2c address of the MT9V032 sensor.

Let’s try grabbing a frame with the ‘v’ command – oops, timeout! Could it be that the sensor is in standby mode? I guess we’ll have to check the schematics now. And here we should emphasize: The leanXcam does not make a secret about its internals: The schematics are openly available (Why keep something a secret that isn’t really one?)

Nah, everything ok, the sensor should run. Giving it a few tries and running into the usual obscure core faults we remember: Random core faults mostly got to do with bad SDRAM! After revisiting the settings and fixing them, we see:

Bingo. We lost 6 frames due to the output via the bfpeek channel that burns many CPU cycles, but that was to expect. We ignore the data error, because we didn’t yet enable the test pattern.

Well, this is kinda amazing. It does not happen so often that you plug in hardware of that sort and it works that smooth right away.

Thus, I can recommend the leanXcam to anyone who wants to get into serious image processing, be it uClinux or standalone.